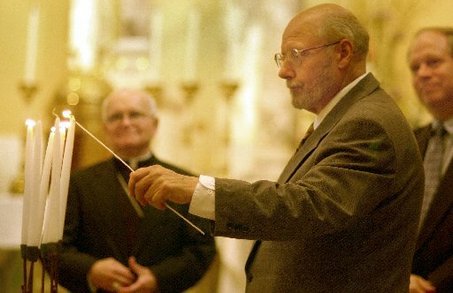 STAFF PHOTO BY JOHN MCCUSKER
Rabbi Jack Bemporad, center, lights a menorah during a dedication ceremony at Notre Dame Seminary in New Orleans Thursday. Archbishop Alfred C. Hughes is at left, Rabbi Edward Paul Cohn of Temple Sinai is at right. The ceremony and the menorah are part of a reconciliation effort between Catholics and Jews. The Center for Interreligious Understanding is placing menorahs in Catholic institutions around the country to highlight the improvements in relations between Catholics and Jews since the Second Vatican council in 1965. The speakers talked of the Holocaust both in the c ontext of the legacy on Judeism as well as Catholics and Christians. The menorah is a replica of the Yom Hashoah menorah given to Pope John Paul II in 1999. Shot Thursday, September 11, 2003.