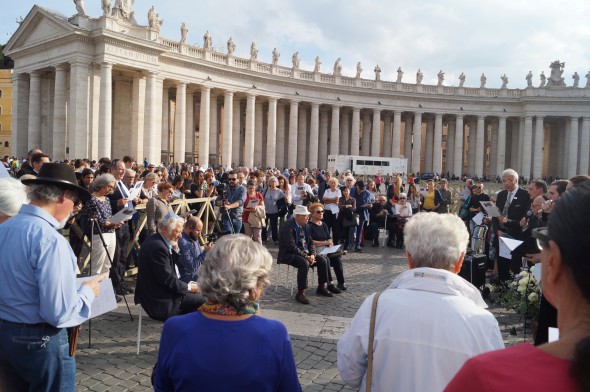 Throngs gather at the Obelisk in St. Peter’s Square to “remember together” the deportation of the 1,022 Jews to Auschwitz on October 16, 1943. Photo by Maria Wallbrecher

On October 15th, CIU representatives participated in the Ricordiamo Insieme Memorial of the deportation of 1,022 Jewish Roman citizens to Auschwitz, at the hands of German Nazis on October 16, 1943.

CIU Director Rabbi Jack Bemporad and Jonnie Sofer, Director of Administration and Programs, were among the crowd of participants, guests, and tourists gathered in St. Peter’s Square to commemorate the 75th Anniversary of the Jews’ final journey. The victims, including 200 children, had been rounded up at dawn, not only from their homes in the ghetto district, but from all over the city, as well as from hospitals, and made to stand near the Roman Synagogue. From there, they were forced onto trucks that transported them to the Military College, which, according to Dr. Tobias Wallbrecher “can be considered the last stop before hell.” They were sent to Auschwitz from the Military College two days later, from which only 16 survived.

The annual event was produced by the association Ricordiamo Insieme, which means “let’s remember together.” It was founded in 2012 by Friederike and Tobias Wallbrecher, German Catholics, and the Roman Jewish Spizzichino sisters, Sara, Rivka and Grazia, grandnieces of the sole female survivor of the deportation.

Tobias and Friederike Wallbrecher began the Memorial event with a prayer written by a German Bishop, “It was my people who did this,” which was followed by a Hebrew song by Cantor, Dr. Marco Di Porto. Fr. Etienne Vetö, Director of the Cardinal Bea Center for the Study of Judaism at the Gregorian University, spoke movingly about the responsibility of Catholics to remember the past event and reach out in brotherhood. 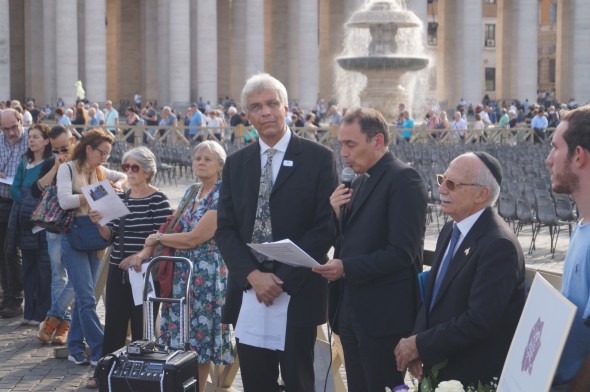 A most dramatic portion of the commemoration was the march from the Obelisk to the Military College through a tunnel by the entire group of participants, speakers and audience; traffic was halted and a police escort followed behind. 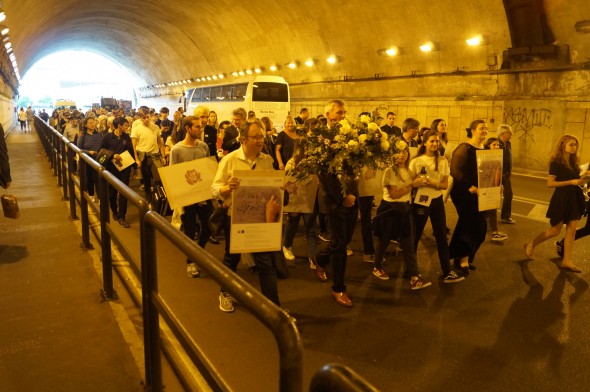 Witnesses to Ricordiamo Insieme on their way for the march of the 1000 steps from the Obelisk in St. Peter’s Square to the Military College in Piazza Della Rovere.

All then assembled in the Military College courtyard to hear testimony from an Auschwitz survivor, Dr. Piero Terracina, who had been deported from Rome in the spring of 1944. In addition, Israeli Ambassador to the Holy See, the Honorable David Oren, gave a forceful talk regarding growing anti-Semitism in relation to the Nazis (read Amb. David’s Talk).

A very moving presentation at the College was the reading of the names of all those deported, against a backdrop of a film of a blank blackboard showing a hand “unerasing” each name; the name of each person reappeared on the blackboard as the hand moved back-and-forth, in effect, the reverse of erasure, a very moving installation created by the Spizzichino sisters themselves. Rabbi Bemporad, who was born in Pisa, Italy, and who fled the fascist regime at the age of five with his parents and brother heard, among the names of those deported, relatives from both his mother’s and father’s sides of the family. 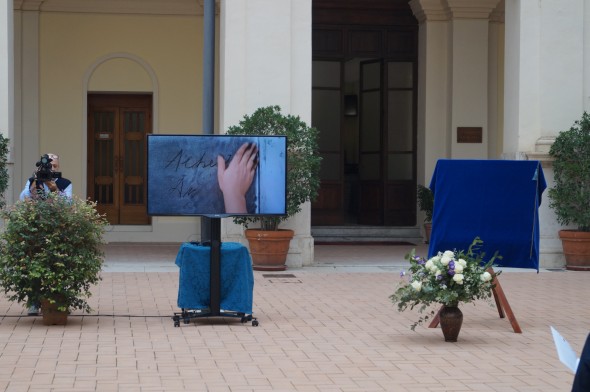 The hand that “unerases” the names of the Roman Jews rounded up on October 16, 1943 and exterminated at Auschwitz. Photo by Maria Wallbrecher

Among the speakers and hymns at the Military College were moving remarks by the Italian Military Bishop, SE Santo Marcianò; words of the President of the Roman Jewish Community, Dr. Ruth Dureghello, whose grandparents had been held prisoners there; and final remarks by the Head Rabbi of Rome, Riccardi Di Segni, medical doctor, who had lost a great part of his family in Auschwitz. His father had participated in the Italian liberation war as an important partisan.